No Result
View All Result
Home Cryptocurrency and NFT

Decentraland: Traders could see some profits if MANA stays put at these levels

in Cryptocurrency and NFT
0

Disclaimer: The findings of the following analysis are the sole opinions of the writer and should not be considered investment advice

Further gains could occur if MANA could manage to record a bullish breakout from its recent ascending triangle pattern. As of 2 December, MANA was trading at $0.4107. If Bitcoin [BTC] recaptures and holds the $17K level, a bullish breakout from the ascending triangle could be possible. This could put MANA on an uptrend towards $0.4740 and $0.5054. 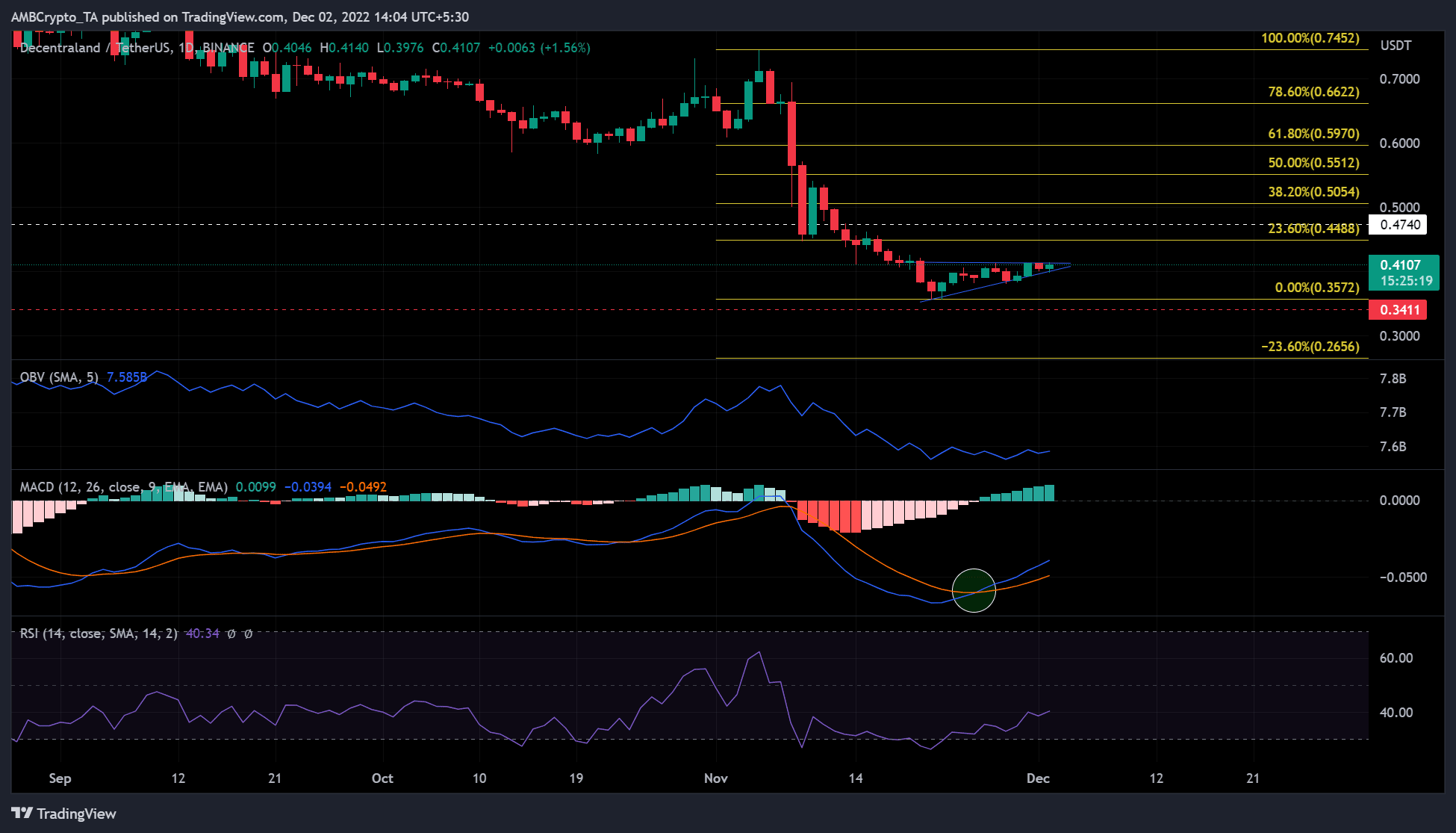 MANA was already posting lower lows before the FTX implosion. However, two weeks before the FTX saga, MANA rallied, reaching a high of $0.7452. The post-market plunge caused it to break through several support levels.

The bulls found a resting zone at $0.2572, from which a successful rally was initiated on 22 November. Since the beginning of the recent rally, MANA’s price movement formed an ascending triangle – a typical bullish chart pattern.

In addition, the price formed a bullish MACD crossover, which was a buy signal for an early uptrend. Therefore, MANA will likely target $0.4740 and $0.5054 on an upside breakout.

In particular, the Relative Strength Index (RSI) also moved out of the oversold territory and was seen on a steady rise. It showed that sellers had less and less influence, and buying opportunities were increasing.

The On-Balance Volume (OBV) also increased slightly after being relatively flat for about two weeks. This indicated that buying momentum was growing as trading volume witnessed a rise. This could increase buying pressure and help the bulls make an upside breakout from the ascending triangle in a few days or weeks.

However, an intraday close below the current support at $0.3572 would negate the bullish bias described above.

Interestingly, network growth from MANA bottomed out in Q3, which coincided with falling prices. So the recent uptick in growth could contribute to a price recovery.

This could indicate that sentiment was improving, although there was still a long way to go. Thus, investors should keep an eye on BTC and MANA sentiment.

Top 7 Memes Cryptocurrencies Under US$1 To Buy Before 2023

Top 3 Metaverse Stocks to invest before 2023

Crypto proponents would be wise to keep their eyes on nonfungible token (NFT) and metaverse trademark applications this year, which...

The general crypto market has increased in market cap in 24 hours, up by 2.89%. Ethereum (ETH), the second-largest crypto...

Tether aims to increase visibility and mitigate controls of cryptocurrency payments used in child abuse content marketplaces through a collaboration...

At present, Shiba Inu, the well-known meme coin has been one of the best-performing cryptocurrencies by market cap. Anticipation around...