Meta is no longer one of the 20 biggest U.S. companies

Sixteen months after Facebook crossed $1 trillion in market cap, joining an exclusive club consisting of Apple, Microsoft, Alphabet and Amazon, its parent company Meta is worth less than Home Depot and barely more than Pfizer and Coca-Cola.

Far from Facebook’s Big Tech days, Meta is no longer among the 20 most valuable U.S. companies after the stock sank 23% on Thursday. The company has shed 70% of its value this year and 74% since the stock peaked in September 2021, totaling over $730 billion in market cap lost. It’s trading at its lowest since early 2016, when Barack Obama was still president.

The stunning collapse of Meta’s share price is reminiscent of the dot-com bust days, but far bigger in terms of value erased from a single company. The slide began late last year as signs of a sputtering economy started to emerge, and accelerated in early 2022 after the company said Apple’s privacy change to iOS would result in a $10 billion revenue hit this year.

Founder and CEO Mark Zuckerberg has been unable to stop the bleeding and only seems to be making matters worse. Since changing the company name to Meta a year ago Friday, Zuckerberg has said its future is the metaverse, a virtual universe of work, play and education. But investors just see it as a multibillion-dollar money pit, while the core advertising business shrinks — Facebook is forecasting a third consecutive drop in revenue for the fourth quarter.

A somewhat perplexed Zuckerberg acknowledged on Wednesday’s earnings call that “there are a lot of things going on right now in the business and in the world.”

“There’s macroeconomic issues, there’s a lot of competition, there’s ads challenges especially coming from Apple, and then there’s some of the longer-term things that we’re taking on expenses because we believe that they’re going to provide greater returns over time,” Zuckerberg said. “I appreciate the patience and I think that those who are patient and invest with us will be rewarded.”

Meta now trades for just three times revenue, less than one-third of its five-year average. It’s now worth half as much as Berkshire Hathaway and has a smaller market cap than companies including UnitedHealth, Chevron, Eli Lilly, Procter & Gamble, Bank of America and AbbVie.

The other four tech companies that propelled past the trillion-dollar mark are all still there and remain the four most valuable U.S. businesses, even though they’ve taken big hits this year as well alongside the rest of the market.

Within tech, the other two companies Meta has fallen behind are Tesla and Nvidia. Next on the list would be Oracle, which is currently valued at just over $200 billion, or $70 billion below Meta.

WATCH: This is a true bet-the-company moment for Zuckerberg 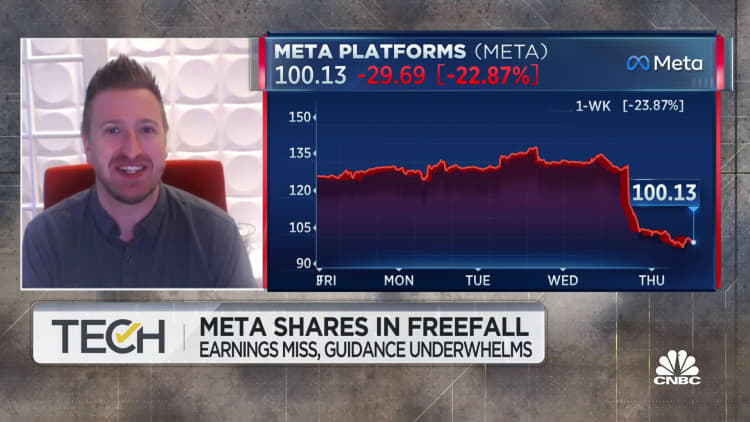 Why the metaverse is good — even if Meta stock says otherwise: analyst